Airport face scanners designed to verify travellers’ identity against their passport photographs are working at such a low level that they would be unable to tell the difference between Osama bin Laden and the actress Winona Ryder, it has been claimed.

In a leaked memo, an official says the machines have been recalibrated to an “unacceptable” level meaning travellers whose faces are shown to have only a 30 per cent likeness to their passport photographs can pass through.

The machines, undergoing trials at Manchester airport, have apparently been questioning so many passengers’ identities that they were creating huge queues.

The technology was designed to help immigration officials spot people traveling under false passports, particularly terrorists, but the multi-million pound scheme now appears to be in jeopardy.

In the email, the official says: “Update on the calibration – the facial recognition booths are letting passengers through at 30%.

“Changes appear to have been made without any explanation [or] giving anyone a reason for the machines [creating] what is in effect a 70% error rate.

“[The fact that] the machines do not operate at 100% is unacceptable. In addition it would be interesting to know why the acceptance level has been allowed to decrease.”

Rob Jenkins, an expert in facial recognition at Glasgow University’s psychology department, said lowering the match level to 30 per cent would make the system almost worthless.

Using facial recognition software from Sydney airport in Australia set at 30 per cent, he found the machines could not tell the difference between Osama bin Laden and the actors Kevin Spacey or even the actress Winona Ryder while Gordon Brown was indistinguishable from Mel Gibson.

Announcing a trial of five of the devices at Manchester airport last August, Jacqui Smith, the Home Secretary, said they would improve security by making it more difficult for terrorists using false passports.

At the moment the technology is only being used on British and European travelers on “high risk” flights but it is planned to extend the technology to almost all non-European Union citizens by the end of 2010.

Patrick Mercer, chairman of the House of Commons subcommittee on counter-terrorism, said he would be asking the UK Borders agency about the warnings.

The Home Office said: “We can categorically confirm that the gates are making the same high level of checks on the British and European passengers using them as they were when the trials began in August last year.

“Previous tests show that they system can reliably pick out imposters and even distinguish between identical twins. An immigration officer supervises the whole process and will intervene where necessary.” 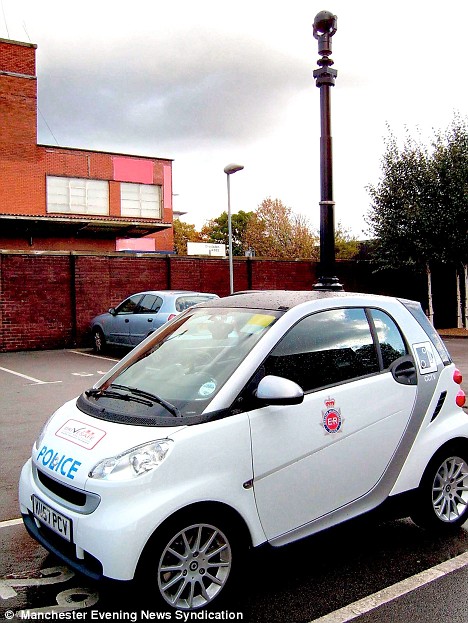 Little Brother is watching you: One of the police Smart cars with tall camera mast

The Big Brother vehicles will merely be another cash cow for the Government and a further ‘tax’ on hard-pressed motorists.

Police are taking a leaf out of Google’s book with their latest weapon in the war on motorists.

They are using cars with spy cameras on a mast. Drivers talking on their mobile phones, eating, applying make-up or otherwise driving illegally will be pictured.

And as the telescopic cameras can zoom in from some distance, the first inkling that they have been snapped could be when a £60 fine lands on the doorstep.

Police say the new cars – similar to those used by Google to map town and city streets – will help reduce road deaths. But motorists say the Big Brother vehicles will merely be another cash cow for the Government and a further ‘tax’ on hard-pressed motorists.

The Treasury already rakes in more than £105million in fines each year from speed cameras and driving-offence fixed penalties.

Two Smart cars are pioneering the scheme in Greater Manchester, where distracted motorists are said to have caused more than 400 accidents in the past two years, killing or seriously injuring 25 victims.

Drivers who are caught using their mobiles will be sent a £60 fine and will have three penalty points on their licence.

Those caught on camera without a seatbelt or driving erratically while eating will be fined £30.

Anyone who refuses to accept a fine – which will go into Treasury coffers – could be hauled before the courts.

Karen Delaney from DriveSafe, the road safety group behind the latest scheme, said: ‘Many vehicles are now better equipped than offices or homes, with the latest technology in satellite navigation, telecommunications and state-of-the-art music systems all to hand.

‘Add in other distractions such as complex dashboard instrumentation, a hot cup of coffee and a conversation with other vehicle occupants, and it is no wonder that some drivers are not paying attention.’

She added: ‘The Smart enforcement vehicles are fully police liveried and working in areas where our data analysis has identified a high occurrence of “driver distraction” collisions and where officers have regularly observed offences being committed.’

Nigel Humphries, from the Association of British Drivers, said: ‘This is a total infringement. They might as well put something in cars to test what drivers are thinking – to see if they are concentrating on the road or thinking about something else.

‘Apart from that it’s going to be counter-productive. There’s no excuse for not having police officers watching the road to look out for motorists who are driving erratically.’

Peter Roberts, from the Drivers’ Alliance, said: ‘People shouldn’t be using mobile phones when they are driving in the car, especially handheld ones. But I am not comfortable with spy cameras which can see into your car and see what you are doing.

‘The old-fashioned type of policing where coppers are sitting by the side of the road watching people go past to see if they are using a mobile is a far better way of doing things.’

Collapse: Ian Tomlinson had a heart attack during the G20 protests

A newspaper seller who died after suffering a heart attack during the G20 protests was attacked by police, witnesses said yesterday.

Ian Tomlinson, 47, was hit with a police baton and shoved to the ground by officers in riot gear, according to statements received by the police watchdog.

The Independent Police Complaints Commission is examining several accounts which allege Mr Tomlinson, a married man who lived alone in a bail hostel, was struck and pushed by police.

He was on his way home from work at a newsagent when he was caught up in the mass protests near the Bank of England last Wednesday evening.

Shortly afterwards, he collapsed and suffered a heart attack.

Initially, a police post mortem examination attributed his death to natural causes. But this version of events was challenged after witnesses came forward saying they recognised the dead man from photographs published on Friday.

A female protester, who does not want to be named but has given a statement to the IPCC, said she saw Mr Tomlinson being pushed aggressively from behind by officers.

‘I saw a man violently propelled forward, as though he’d been flung by the arm, and fall forward on his head,’ she said.

‘He hit the top front area of his head on the pavement. I noticed his fall particularly because it struck me as a horrifically forceful push by a policeman and an especially hard fall. It made me wince.’

Amiri Howe, 24, also gave a testimony to the IPCC which supports allegations of police violence.

She recalls seeing Mr Tomlinson being struck ‘near the head’ with a police baton.

Photographs taken by Miss Howe show the dazed newspaper seller being helped from the pavement by a bystander. 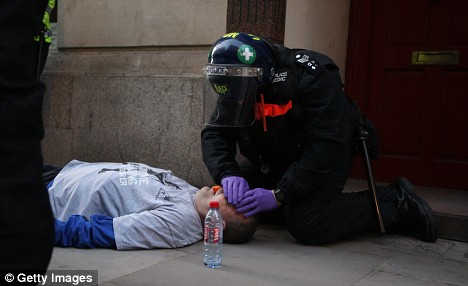 Fight for life: Mr Tomlinson being treated by police on the street

Anna Branthwaite, an experienced press photographer, has told the IPCC: ‘I can remember seeing Ian Tomlinson. He was rushed from behind by a riot officer with a helmet and shield two or three minutes before he collapsed.’

Mr Tomlinson, a married man who lived alone in a bail hostel, was not taking part in the protests.

Mr Tomlinson is believed to have become trapped between police lines and protesters while he was returning home from work in the City.

He was not demonstrating. After falling, he appears to have been lifted to his feet by a member of the public, before collapsing. He was pronounced dead in hospital later.

Police have claimed that when paramedics tried to move Mr Tomlinson away for urgent treatment, bottles were thrown at them by protesters.

‘We saw this guy staggering around,’ said Natalie Langford, 21, a student. ‘He looked disorientated. About five seconds later he fell, and I grabbed my friends to help him.’

Liberal Democrat MP David Howarth added: ‘Eventually there will have to be a full inquest with a jury. It is a possibility this death was at police hands.’

An IPCC spokesman said that in light of new statements it was ‘assessing’ the information it had received before deciding whether to launch a full investigation.

She added: ‘IPCC investigations are continuing to look at CCTV of the incident, examine statements and police records and speak to independent witnesses.’

Police in Rome have discovered more than 100 illegal immigrants, including 24 children, living in the sewers beneath railway stations in the city.

The children, who are all of Afghan origin, are aged between 10 and 15, and are now being looked after by social services.

Police, who have revealed that the children do not speak Italian, say that they broke into the sewers via manhole covers.

They are believed to have arrived in the city as stowaways aboard trucks from Greece and Turkey, and started sleeping in the sewers in order to shelter from the cold.

Railway police had been following up on reports that groups of homeless immigrants had been living near the city’s three main railway stations.

Groups of illegal immigrants from Bangladesh and China were also discovered in the city recently, living in cramped conditions of over 20 to a room.

Save the Children Italy reported that up to 1,000 unaccompanied children arrived in Rome last year.

The charity said that the figure has risen substantially since 2004, with foreign minors coming from countries across Africa, Asia and Latin America.

Posted in Borders and Immigration

Moldovan voters are at a crossroads

They are said to have won 46% of the vote with their three main rivals on 14%, 14% and 10%, according to polls quoted by foreign news agencies.

The vote has been seen as significant for Moldova’s future course.

At stake are Moldova’s relations with the EU and Russia, as well as the fate of the breakaway Trans-Dniester region.

Opinion polls in the run-up to the vote had suggested the Communist Party would retain its leading position.

The Institute of Public Politics, a Moldovan umbrella group of think-tanks and polling organisations, said the communists would have 56 seats in the 101-member legislature.

President Vladimir Voronin must stand down, having served two terms and one of parliament’s first acts after being elected will be to vote for a new president.

To ensure a large enough majority to choose their own presidential candidate, the communists need 61 seats.

Mr Voronin’s successor will lead a country where the average wage is just under $250 a month and will inherit the still unresolved conflict over the breakaway region of Trans-Dniester.

The dispute is reminiscent of the situation in South Ossetia before last summer’s war, the BBC’s Gabriel Gatehouse reports.

The region has run its own affairs, with Russian support, since the end of hostilities in a brief war in 1992.

Though Trans-Dniester is in de facto independent, no country has recognised it as such and Moldova maintains that the region is an integral part of its territory. Most Trans-Dniestrians are boycotting this vote.

Many hold Russian passports and want their region to join Russia eventually.

Mr Voronin resumed direct talks with the breakaway territory last year and has said he wants to remain closely involved in the affairs of state after he steps down.