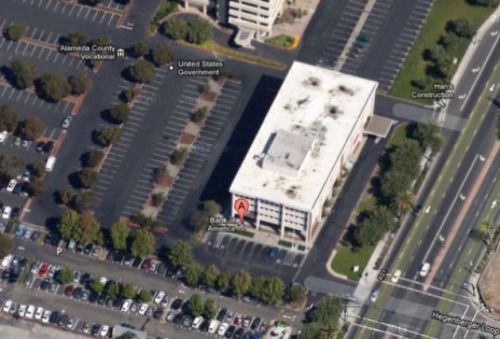 An undercover FBI agent posing as a go-between with the Taliban in Afghanistan had been meeting with Llaneza since Nov. 30 and accompanied him to the bank, according to an FBI declaration filed in federal court. The declaration said the FBI had built the purported bomb, which was inert and posed no threat to the public.

A mentally disturbed man who said he believed in violent jihad and hoped to start a civil war in the United States was arrested early Friday after trying to detonate what he thought was a car bomb at a Bank of America branch in Oakland, prosecutors said.

Matthew Aaron Llaneza, 28, of San Jose was taken into custody near the bank at 303 Hegenberger Road at 12:30 a.m. after pressing a cell phone trigger device that was supposed to set off the explosives inside a sport utility vehicle and bring down the four-story building, said U.S. Attorney Melinda Haag‘s office.

An undercover FBI agent posing as a go-between with the Taliban in Afghanistan had been meeting with Llaneza since Nov. 30 and accompanied him to the bank, according to an FBI declaration filed in federal court. The declaration said the FBI had built the purported bomb, which was inert and posed no threat to the public.
FBI mocks up another false flag terror attack

The FBI Allowed the 1993 WTC Bombing to Happen

Llaneza appeared before a federal magistrate in Oakland on Friday on a charge of attempted use of a weapon of mass destruction, which is punishable by life in prison. He is due to return to court for a bail hearing Wednesday. Assistant Federal Public Defender Joseph Matthews, who was assigned to represent him, declined to comment.

Court records and lawyers in a 2011 criminal case against Llaneza in San Jose described him as delusional and suicidal. He told police in that case that he suffered from post-traumatic stress disorder and depression. His attorney in the San Jose case said a judge had verified in two court hearings that Llaneza was getting mental health treatment.

His arrest came a day after a New York man, Quazi Nafis, pleaded guilty to attempting to detonate what he thought was a 1,000-pound bomb at the Federal Reserve Bank in Manhattan in October, in a case unrelated to Llaneza’s. The FBI said an undercover agent had provided Nafis with 20, 50-pound bags of fake explosives.

In Llaneza’s case, the FBI declaration said he told the supposed Taliban representative in their Nov. 30 meeting that he wanted the bank bombing to be blamed on anti-U.S. government militias. He said he supported the Taliban and believed in violent jihad, the agent said, and hoped the bombing would prompt a government crackdown, a right-wing response and, ultimately, civil war.

He chose the Bank of America branch because of its name and because Oakland has been a center of recent protests, the declaration said. It said Llaneza told the agent he would “dance with joy” when the bomb exploded.

Anne Pace, a spokeswoman for Bank of America, said the bank was “cooperating fully with law enforcement” and declined further comment.

Llaneza and the agent met several times in December and January, and the FBI, following Llaneza’s suggestion, rented a storage unit in Hayward, the declaration said.

On Thursday night, agents said, Llaneza drove an SUV from the storage unit, hauling a dozen 5-gallon buckets of chemicals, prepared by the FBI to look like explosives, to a parking lot in Union City, where he assembled the bomb in the agent’s presence.

He then drove to the bank, parked the SUV under an overhang near a support column of the building, retreated on foot to a safe distance, and pressed an FBI-constructed cell phone triggering device that was supposed to ignite the bomb, the FBI said. Agents them moved in and arrested him.

The FBI did not say how it first contacted Llaneza, but he had been subject to law enforcement monitoring since serving a jail sentence in the 2011 criminal case in San Jose involving assault weapons charges.

In April 2011, San Jose police were called to a trailer where Llaneza lived with his father, Steve, according to court records. Described as suicidal and combative, and shouting “Allahu akbar” – “God is great” – he was held for observation for 72 hours.

Two days later, his father told police he had found an AK-47 assault rifle and a 30-round extended ammunition clip in the trailer. Officers found two more 30-round clips and other items, including a military-style camouflage sniper suit.

Llaneza was not arrested immediately, but a judge ordered him into custody when he appeared in court in May 2011. He pleaded no contest five months later to transportation of an assault weapon and was sentenced to six years in jail, with all but one year suspended, after agreeing to seek mental treatment. With credit for good behavior, Llaneza was released on Nov. 30, 2011.

Santa Clara County prosecutors objected to the sentence, which they considered too light, said Deputy District Attorney Alaleh Kianerci. She said he got the jail term under California’s realignment law, which took effect in October 2011 and sends most low-level felons to county jail instead of state prison. Under the previous law, she said, prosecutors would have sought at least a four-year prison term.

“Obviously he was a threat to the community,” Kianerci said. “We couldn’t keep him in custody forever, so we are lucky law enforcement was monitoring him.”

She said Llaneza was hearing voices and was apparently suicidal when he was taken to a hospital.

The prosecutor said Steve Llaneza told police that his son, a native of Arizona, had been living with his mother there, had been in the Marines before being kicked out, and was familiar with weapons. He had worked as a window washer in Arizona before losing his job in May 2010 and was taking medication for bipolar disorder.

The father told police he was concerned about his son, who had recently converted to Islam.

While the AK-47 and the clips were purchased legally in Arizona, bringing them into California is illegal. Matthew Llaneza told police he had bought the rifle to protect himself from people who were after him, and mentioned previous suicide attempts.

“Someday you are going to find me dead in the desert,” he told San Jose officers.

Llaneza was a different, more stable person when he was in custody and on medication, said Cameron Bowman, his lawyer in the San Jose case. He said he verified that Llaneza had been in the Marines, but that his claims to have been an armorer and a sniper were “his own fantasies – he had a lot of fantasies.”

“When I met him, I thought he was a very troubled person, with clear mental problems,” Bowman said. “I think that the court was trying everything possible to get him into treatment, get him supervised by professionals. I saw him as somebody who is at least bipolar, probably schizophrenic, and not somebody who should be turned out to the streets.

“This new case shows he was not getting the mental health treatment he needed.”