Afghan Massacre base produced the ‘Kill Team’, a suicide epidemic, spousal abuse, a waterboarded daughter, murders of civilians, sex crimes, and much more 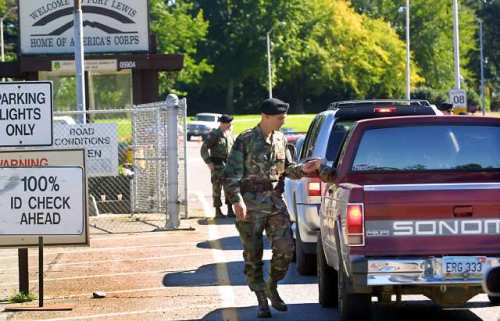 A main gate at Joint Base Lewis-McChord, shown in 2001. The base is one of the most troubled in the military, plagued by killings, suicides and domestic violence. (Lauren McFalls / Associated Press)

By Kim Murphy and Christi Parsons

Reporting from Seattle and Washington, D.C.— The staff sergeant who turned himself in after the recent shooting deaths of 16 Afghan civilians was based at Joint Base Lewis-McChord, a sprawling suburban Army facility south of Tacoma, Wash. It’s the biggest military base on the West Coast — and one of the most troubled in the Army.

Lewis-McChord, a major staging area for troops going to and from Iraq and Afghanistan, has been plagued over the last two years by a wave of suicides, killings and domestic violence. It was also the scene of the high-profile courts martial of a “kill team” of soldiers on charges of murdering Afghan civilians in Kandahar province for sport.

A U.S. official told the Los Angeles Times that the serviceman now in custody in the latest shootings is a 38-year-old father of two who has spent 11 years in the Army.

He is a veteran of three tours of duty in Iraq and was on his first deployment to Afghanistan, serving as security for special forces in the Kandahar region.

“The individual was augmenting [special operations forces] personnel and his primary responsibility was force protection at the combat outpost,” a senior defense official said.

Last month, two investigations were launched at the base’s Madigan Healthcare System after more than 200 soldiers had their diagnoses of post-traumatic stress disorder set aside following cursory forensic psychiatry reviews — boosting longstanding complaints among soldiers and their families that help for war-related mental health problems has been slow and hard to access.

Madigan’s director, Col. Dallas Homas, has been suspended pending the outcome of the inquiries. The probes follow years of complaints from Lewis-McChord soldiers and their families that soldiers are discouraged by their peers from seeking mental health counseling. Many also say that victims of stress often must endure long waits for an appointment for mental health assistance.

A number of soldiers at Lewis-McChord, like the staff sergeant identified in the Kandahar civilian shootings, have deployed three or more times to Iraq and Afghanistan.

The Times reported in December that Lewis-McChord, a joint Army and Air Force facility with nearly 60,000 military and civilian staff, has seen 62 soldier suicides since 2002, as many as 12 of them last year.

Combat stress and other emotional problems have been a problem throughout the Army, not just at Lewis-McChord. The Army’s public health command reported last week that suicides among soldiers rose 80% between 2004 and 2008, with about a fourth of those linked to combat experience in Iraq.

Communities around Lewis-McChord and other high-deployment bases have also seen troubling rises in crime, domestic violence and other violent crimes, often committed by soldiers with multiple combat deployments.

Earlier this year, a 24-year-old Iraq war veteran shot and killed a park ranger at Mt. Rainier National Park. In December, a Lewis-McChord soldier was charged with premeditated murder in the late-night stabbing of a 19-year-old woman in a Seattle suburb. The wife of a Lewis-McChord sergeant testified earlier this month that her husband doused her legs in lighter fluid and lit her on fire. Other cases have involved a father accused of waterboarding his child, and a soldier who killed his wife and hid her body in the garage.

The highest-profile case so far involved the so-called “kill team” in Kandahar province. Military prosecutors said it went in search of Afghan civilians to kill, setting up “scenarios” that made it look as though the soldiers had been attacked. The group from 5th Brigade, 2nd Infantry Division, led by Staff Sgt. Calvin Gibbs, kept victims’ fingers and other gruesome mementos of the killings.

Testimony in the 2010 case played out in a military courtroom for much of last year, with Gibbs ultimately being sentenced in November to life in prison. Three other soldiers were also sentenced to prison.

GI Voice, a local anti-war veterans support group outside Lewis-McChord that has campaigned for better mental health services, on Sunday called for a congressional investigation into the “multiple crises coming from this rogue base.”

“In 10 years of war, JBLM has produced a Kill Team, suicide epidemic, denials of PTSD treatment, denials of human rights in the brig, spousal abuse and a waterboarded daughter, murders of civilians (including a park ranger), increased sex crimes, substance abuse… and much more,” GI Voice’s executive director, Jorge Gonzalez, an Iraq war veteran from Lewis-McChord, said in the statement.

“These abuses are not because of a few bad apples, but because of the base’s systematic dehumanization of soldiers and civilians, both in occupied countries and at home.

“It’s surprising, but it’s no longer a shock,” Gonzalez added in an interview. “I just keep expecting, what else is going to happen out of this base?”

The group has scheduled a vigil to memorialize the victims of Sunday’s shooting at 6 p.m. outside one of the base’s main gates.