Like he does in his monthly blog on Vibe.com, the incarcerated Prodigy recently spewed more of his conspiracy theories via a handwritten letter to URB. This time, he reveals the moment his eyes were opened to the sham he calls “the government, religions, politics, the Federal Reserve, and I.R.S.”

According to P, in 1996, after reading a book by Dr. Malichi Z. York titled Leviathan 666, he was moved so much, he cried, and that was his “moment of clarity.”

“I was crying for all of humanity, but mostly for my black people ’cause I then realized it was all a sham,” Prodigy writes in his letter to URB. “The government, religions, politics, the Federal Reserve, the I.R.S., and everything that we believe and live by is a joke.”

Even worse, the rapper says that many popular rappers are aware of these society secrets, but choose not to speak on it for fear of not being accepted by corporate America. One, in particular, is Jay-Z.

“J.Z. knows the truth, but he chose sides with evil in order to be accepted in the corporate world. J.Z. conceals the truth from the black community and the world, and promotes the lifestyle of the beast instead,” he wrote.

Prodigy says that Jay grew up grew up in Dr. York’s “Nuwabian” community in Brooklyn as a kid, and is “aware” of these evils — rogue government, elitists running the country, etc. (For more on Dr. York, read up here)

Because of Jay’z refusal to speak on the topics Prodigy has been doing so since his incarceration, he will make it a point to wage war against him.

“J.Z is a God damn lie. I have so much fire in my heart that I will relentlessly attack J.Z, Illuminati, and any-every other evil that exists until my lights are put out,” P writes.

“This negativity I speak of is an actual living entity that uses us as food. We must sever ties with it in order to see things for what they really are. This negative energy is created and harnessed by the Illuminati secret government and they will make you spread this energy without you even knowing it. But people like J.Z. are very well aware. He was schooled by Dr. York,” he continued.

P also revealed that another autobiographical project titled My Infamous Life will be out in 2010. 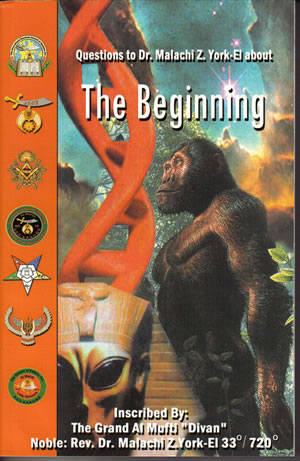 Nuwaubianism is an umbrella term used to refer to the doctrines, and teachings of the followers of Malachi Z. York. The Nuwaubians themselves reject this term Nuwaubianism as it is found nowhere in the literary works of their teacher Malachi Z. York. They refer to their teachings by such terms as “Nuwaubu”, “Nuwaupu”, “Wu-Nuwaubu”, “Right Knowledge”, “Sound Right Reasoning”, “Overstanding” and “Factology”, and many other names through the years.

The Nuwaubians originated as a Black Muslim group in New York in the 1970s, and have gone through many changes since. Eventually, the group established a headquarters in Putnam County, Georgia in 1993. The Southern Poverty Law Center has categorized the Nuwaubians as a black supremacist hate group.

Nuwaubianism is said to have borrowed from a wide range of sources which include Theosophy-derived New Age movements such as Astara as well as the Rosicrucians, Freemasonry, the Shriners, the Moorish Science Temple of America, the revisionist Christianity and Islam of Mirza Ghulam Ahmad, the numerology of Rashad Khalifa, the ancient astronaut theories of Zecharia Sitchin, Robert Temple’s The Sirius Mystery, J.J. Hurtak’s The Keys of Enoch, the works of Richard Shaver (a proponent of the Hollow Earth theory), David Icke, the UFO mythology of greys and reptilians, the political and legal theories of patriot mythology, modern scientific and pseudoscientific legends like those of Area 51, the Philadelphia Experiment, Project Blue Book, Montauk Project, and MJ-12, popular conspiracy theories such as those about the Illuminati or the Bilderberg Group, and even a paperback on fortune-telling.

Journalist Adam Heimlich reviewed a number of York’s booklets in 2000 and wrote:

A partial list, from my notes, of places I’d encountered Nuwaubian notions before includes Chariots of the Gods and the Rael’s [sic] embellishments on that book, conspiracy lit, UFO lit, the human potential movement, Buddhism and new-age, astrology, theosophy and Blavatsky, Leonard Jeffries and other Afrocentrics, Cayce, LaRouche, alternative medicine, self-help lit, Satanism, the Atkins diet, numerology and yoga. Many of these York mentions by name. There are also extensive discourses on the Torah, Gospels and Koran, as well as on Rastafarianism, the Nation of Islam and the Five Percent Nation.

Some of York’s followers consider him to be a living god. At times he has encouraged this interpretation, and at other times, York has suggested that he is merely channeling the divine through various personalities. He has also identified himself as Al-Khidr (“the green one”) and as Melchizedek (who York says is also the archangel Michael). In later years York dismissed bodily worship of himself in a preface that was published within all of his books:

I am not the Lord Adonai, Jesus Messiah “The Christ”; nor am I a holy man, nor a preacher. I am a Master Teacher, a guide.

Nuwaubians also may view themselves as gods, using such sources as the Bible and Torah to validate their claims. Nuwaubians do not see the use of the word “god” as just referring to a universal creator, but also a title that one receives upon reaching a state of perfection or absolute power.

York was arrested in 2002, and was later sentenced to 135 years in prison for sexually molesting boys and girls whose parents were members of the Nuwaubians and for RICO violations. His followers continue to disseminate his teachings as he continues to develop them from behind bars. 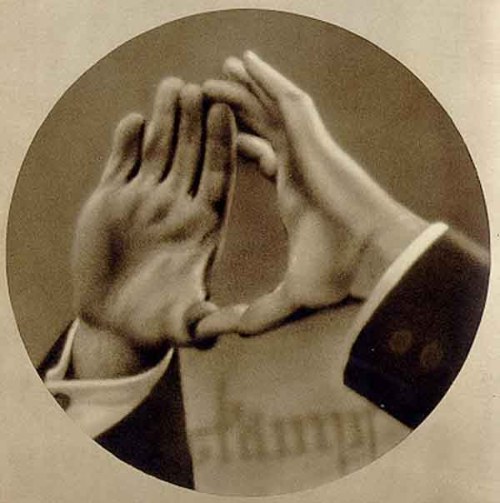 “The hands of the Führer organize his speech. This picture captures Hitler’s hands as he speaks of the unity of the National Socialist and socialist ideas…” 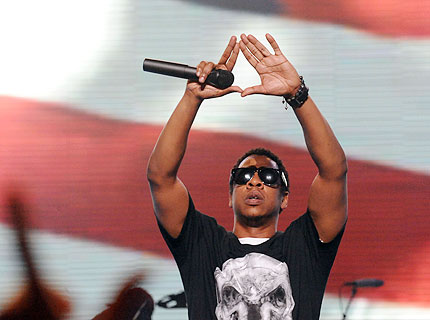 First-Ever Masonic Inaugural Ball to be Held for Obama 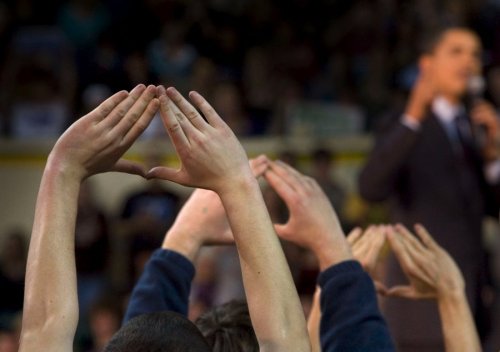 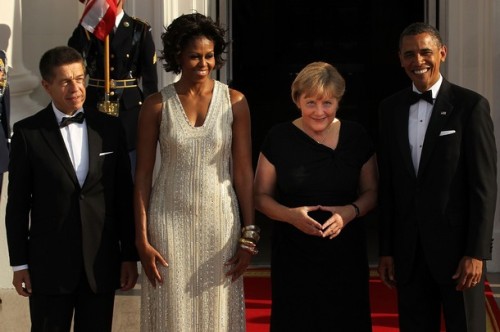 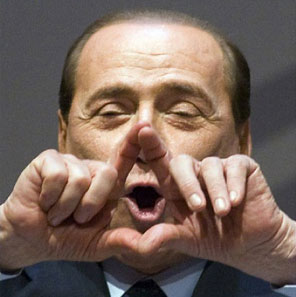 “The Eye of Horus gestures are believed to be used to channel spirits through one’s ‘illuminated’ body. So people are not going to go on and on about the pyramid being Jay-Z’s Roc symbol…and see this picture of Gloria Steinem, editor of Ms. Magazine and supposed feminist. She has nothing to do with Jay-Z other than she also holds up the alleged Illuminati pyramid sign at various photo opportunities.”

The Oracle of Omaha flashes the diamond sign at the re-opening of Jay-Z’s New York City club 40/40.

Star Trek salute in “The Way to Eden” 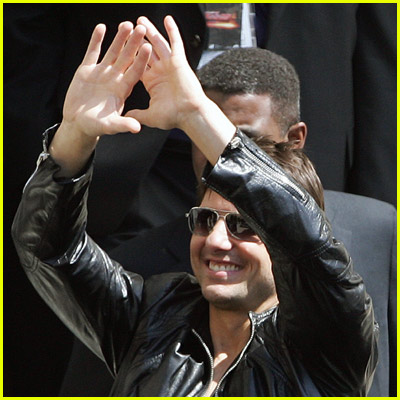 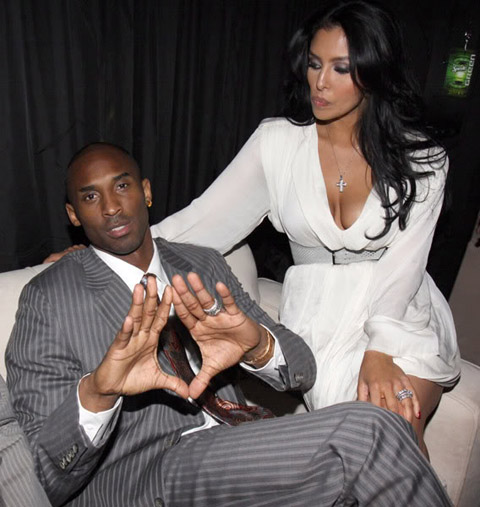 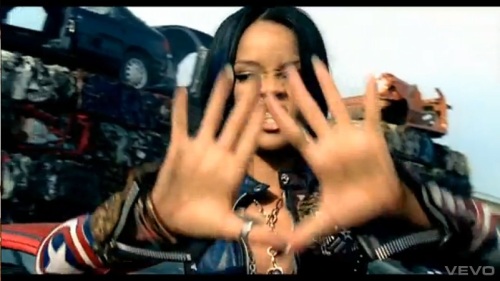 Flashing the secret sign to Beyonce from the crowd at the Superb Owl (lower right) Source: Twitter/noeybels 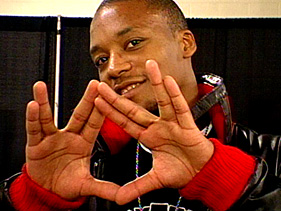 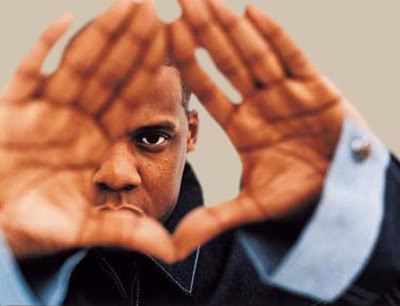 So much exposure going on that even the Freemasons have to admit that there are Masonic references in hip-hop and rap. But it’s “rare” they claim.

Masonic references in the hip hop and rap community

When the countdown hit “0,” Jay rose from beneath the stage, the lyrically intricate “Dynasty Intro” being played by his band, the Roc Boys. Then a brief snippet of “Lucifer” played before Jay went into his jaw-dropping verse from Rick Ross’ “Free Mason.” – Eminem, Jay-Z Joined By Dr. Dre, Drake At Historic Detroit Concert 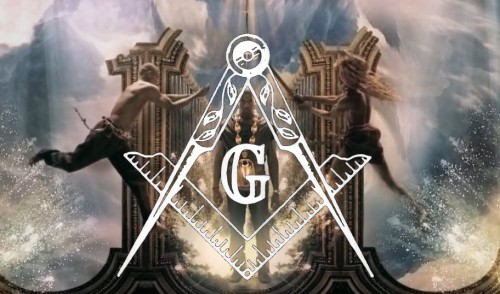 Kanye West’s “Power”: The Occult Meaning of its Symbols